I’ve been feeling so much better in the past few weeks, no more morning sickness, YAY 🙂 so I decided to get the work back underway.

I started out making a list of what it would take to get the van to lock up stage (minus the window Dad broke with his head, had a lovely egg for his trouble. Next time deciding not to walk so close to the van with its open windows). At lock up stage the floor will be in and so this preggers lady doesn’t have to walk over the floor rails and risk a nasty fall.

I selected from my list the jobs that I could do without harm, crossing off things like spraying rust converter and anything that requires lifting or serious muscle work. I settled on refurbishing the door.

I set about removing the window section, hinges and lock, before ripping off the rotted and peeling inner plywood. Discovered the rot wasn’t just in the ply but also the bottom rail of the door as well. I cut a new piece from some of the old timbers we pulled out of the van and decided this time I would paint it in case water ever got into the door again, limit, or at least slow, down any future rot.

I decided I didn’t need a window in the door, plus when the window in the van and the door were both open they hit each other every time you opened the door and the whole door had a lot of flex in it. So I removed the inner aluminium skin and after prepping the 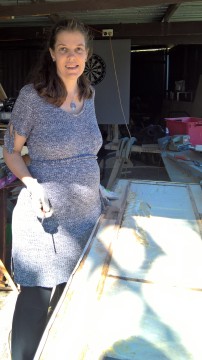 surfaces and cleaning them up sealed the window to the door with silicon and screwed it closed permanently. Immediately the flex was almost gone.

After removing all the nails and staples from the frame work and aluminium it was ready for the foam filler. We decided on foam in the door because it sets solid and could offer more rigidity than the wool insulation. I had Steve spray it in, I’m not silly, or maybe I am cause he over filled the first section and it blew out the side and in between the frame and aluminium skin. Anyhoo, after solving that problem by not clamping the sections closed, we ran out of spray 3/4 through. I had to run down to Bunnies to get another can to finish the job. No biggy.

Because of the new idea of not clamping it shut, the excess had to be sawn off once dry, the foreman became covered in iddy biddy flakes of foam, and while she enjoyed the attempt to rub it off all I managed to do was statically cling it to her further! The stuff got everywhere and had to be scraped off. That aside, I had Steve help install the new ply as it required some muscle to bend the aluminium over the plywood, together with several clamps, we eventually got the job done.

Installing the lock was relatively easy, though I’m glad we discovered that the latch was backwards before we had completely installed it, and that it was easily enough to reverse. I now have a door with a working lock in it and the key to open it. 😀 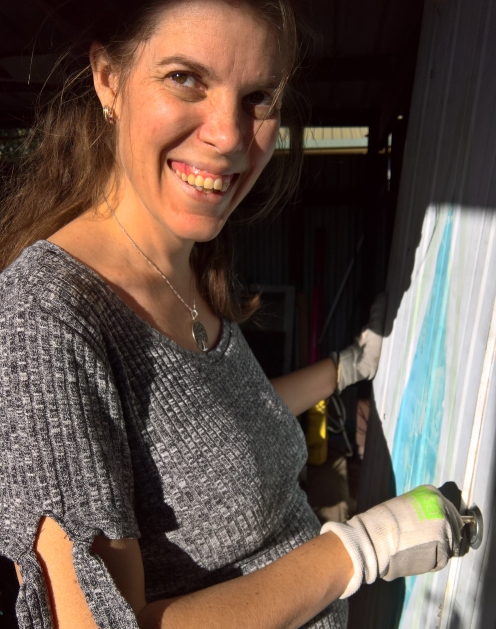